When a storm strikes and the power goes out, a good generator can prevent hours in the dark and a fridge full of spoiled food. Depending on its size, a portable generator can provide up to 15,000 watts of energy, enough to keep the lights on and power the air conditioner and refrigerator. However, a generator is only as good as it is reliable. With so many brands on the market, finding a model that provides dependable backup power without breaking the bank can pose a challenge. This guide delves into the world of generators to identify the top brands on the market and reviews the factors that make these generators a good purchase.

Not only does the brand manufacturer some of the most reliable automobiles on the market, but it also produces quality generators. Honda revolutionized the generator market when it introduced the now legendary EU1000i model in 1998, redefining the market for portable power.

Since then, the company has continued to improve on that technology while others have sought to copy it. Though this generator is more expensive than others, consumers are willing to shell out the extra dough because of Honda’s reliability and reputation for quiet operation—the EU2200ITAG produces around the same amount of noise as a coffeemaker at its loudest. However, Honda’s cutting-edge technology isn’t cheap. 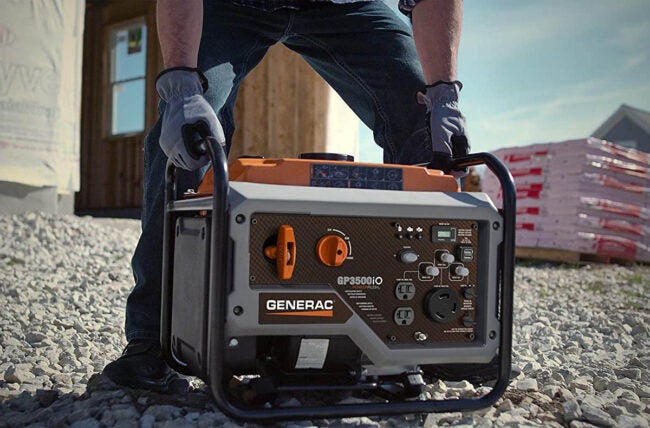 Known for: On a watt-per-dollar basis, Generac’s generators offer some of the best value in the generator market.
Price: $500 to $1,000
Editors’ Choice: The GP3500iO Open Frame RV Ready Inverter Generator (available on Amazon), which produces 3,500 starting watts and falls well under the $1,000 price point, is a good example of the value Generac offers.

Unlike some of the other top brands that produce generators as only a part of their business, Generac only makes generators. Generac made a name for itself some 60 years ago when it began engineering and producing affordable generators for home use. 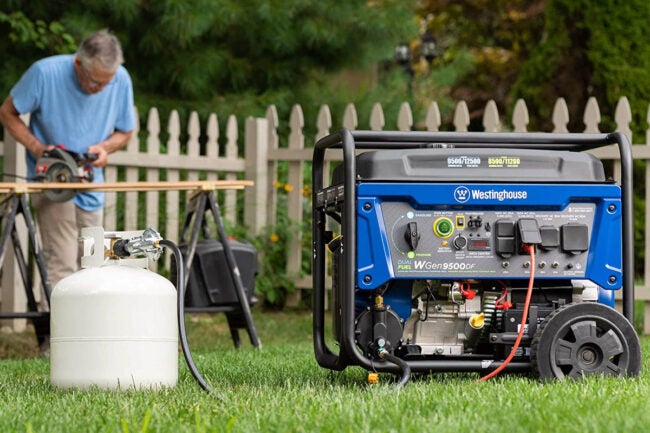 Known for: Westinghouse boasts an extensive product line of generators that meet virtually any demand.
Price: $300 to $1,400
Editors’ Choice: With 12,500 peak watts, the Westinghouse Outdoor Power Equipment WGen9500DF (available on Amazon)  offers a runtime of up to 12 hours.

One of the older companies on this list, Westinghouse was founded by George Westinghouse in 1886 as an electric company. The company produced its first generator, a steam turbine–driven machine, in 1901. Today, Westinghouse produces many different types of portable generators. Its products range from small inverters that generate about 1,200 starting watts to monster machines that produce 15,000 peak watts.

Westinghouse’s large product line, coupled with affordable prices (on a watt-per-dollar basis), allows the company to serve a broad range of customers. Westinghouse has been an innovator in the market: In recent years, it also developed a line of solar-powered generators. The company has also improved the efficiency of its gas-powered models, extending their runtimes to an industry-leading 12 hours. 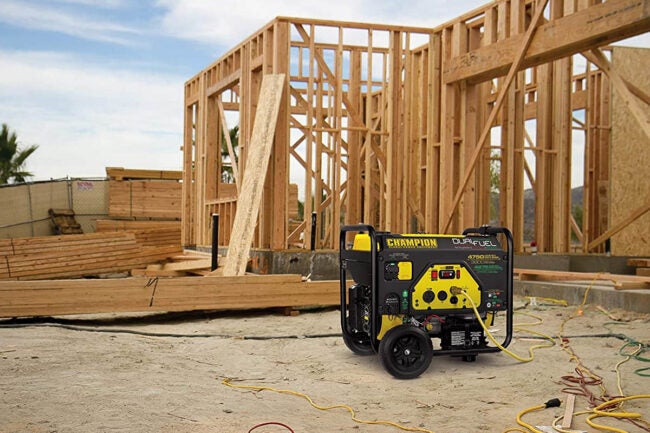 Although Champion launched its generator line in 2003, it quickly rose to the upper echelons of the industry thanks to its innovations in dual-fuel technology and relatively low prices. Its generators are among the most affordable on the market.

The company’s dual-fuel generators can run on either propane or gasoline. Its generators also come equipped with a broad range of plugs, including 30-amp and 50-amp outlets in addition to standard 120-volt outlets. These versatile connections, coupled with their ability to run off propane, have made these generators popular in the RV market. Like its rival Westinghouse, Champion also boasts a broad line of generators that range from smaller 2,000-watt inverters to 12,000-watt beasts. 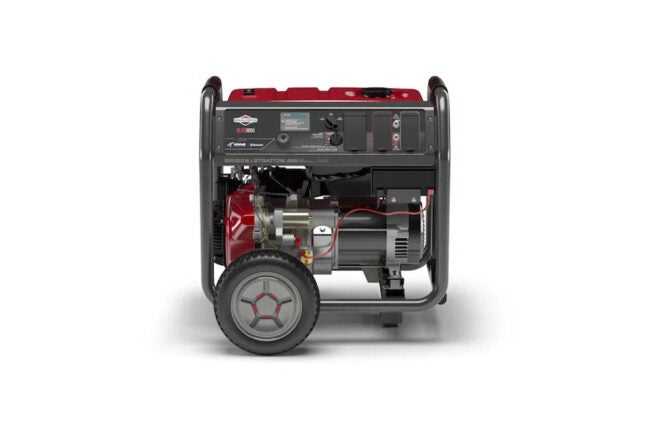 Known for: Briggs & Stratton is one of the leading manufacturers of small gasoline engines.
Price: $500 to $1,200
Editors’ Choice: In addition to a powerful 420cc engine, the Elite 8000-Watt Gasoline Portable Generator (Available at Lowes) allows users to connect to the generator with their smartphone via Bluetooth to monitor power usage, runtime, and fuel levels.

As one of the world’s largest producers of small gasoline engines for everything from lawn mowers to go-karts to generators, Briggs & Stratton should know about building durable engines. The company has a reputation for producing reliable and powerful engines for a broad range of equipment. In fact, its engines are so well regarded that the company provides the engines for several other popular generator brands.

Briggs & Stratton produces some of the top generators on the market. Although the company has a variety of generators to choose from, including portable, inverter, and home standby generators, it’s perhaps best known for its energy-efficient compact PowerSmart Series, as well as its Elite Series of powerful portable generators that can produce as much as 9,000 watts. 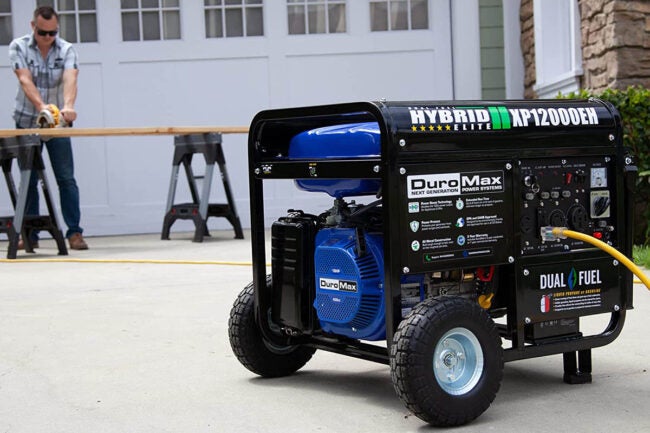 Known for: True to their name, DuroMax generators are known for reliability and durability, while the company has a reputation for innovations in dual fuel.
Price: $600 to $1,700
Editors’ Choice: The versatile DuroMax XP12000EH Generator-12000 Watt Gas or Propane portable generator (available on Amazon) features a 12,000-watt output and a broad range of power outlets.

DuroMax makes its own engines, which are renowned for their durability. Like its rival Champion, DuroMax is an innovator in dual-fuel technologies with many of its generators capable of running off of both propane or gasoline. Several of its generators are loaded with a variety of connections, including 30-watt and 50-watt sockets, making DuroMax generators popular with RVers.

Some of DuroMax’s dual-fuel generators can produce up to 15,000 watts, thanks to a 23-horsepower V-twin engine. DuroMax generators also have innovative features, including its MX2 power boost technology, which doubles the amperage of a 120-volt outlet to 240 volts to handle heavier loads. 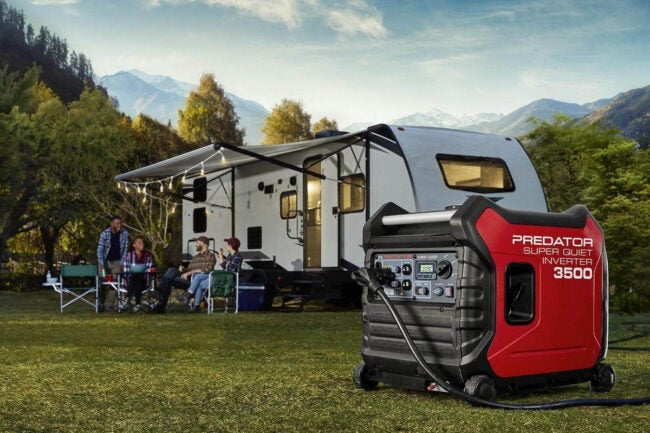 Known for: Predator, the brand name for generators produced by Harbor Freight, produces generators at discount prices.
Price: $400 to $600
Editors’ Choice: Predator’s 3,500 Watt Super Quiet Inverter Generator (available at Harbor Freight)) is an example of the company’s ability to offer high-output generators at a budget price.

Discount tool and equipment company Harbor Freight, which was founded in 1977, markets its own brand of generators under the name Predator. Like its other product lines, Harbor Freight makes generators that boast high performance at a budget price.

One of the company’s most popular generators is a super-quiet inverter that produces a maximum of 3,500 watts, which it sells at a fraction of the price of similar-powered inverters from other brands. The Predator line, which is popular with RVers as well as homeowners and contractors, also includes bargain-priced 4,000-watt generators and larger inverters that produce as much as 9,500 watts. 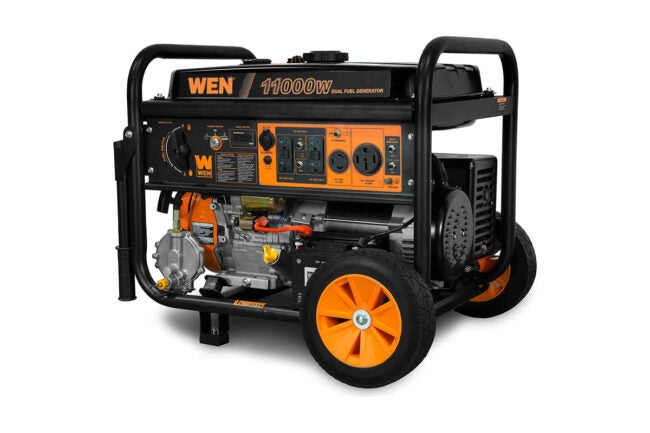 Known for: Wen made a name for itself with a line of affordable portable generators.
Price: $400 to $1,000
Editors’ Choice: Wen’s DF1100T 11,000-Watt 120V/240V portable generator  (available on Amazon) comes in at a lower price point than similar-powered models, while also offering an 8.5-hour runtime.

Wen was a pioneer in the power tool market in the mid-20th century, helping to develop chainsaws, soldering guns, electric jigsaws, and other products since its launch in 1951. Over the years, Wen expanded to include a variety of other power tools, including generators. Wen produces generators that are among the least expensive on the market. 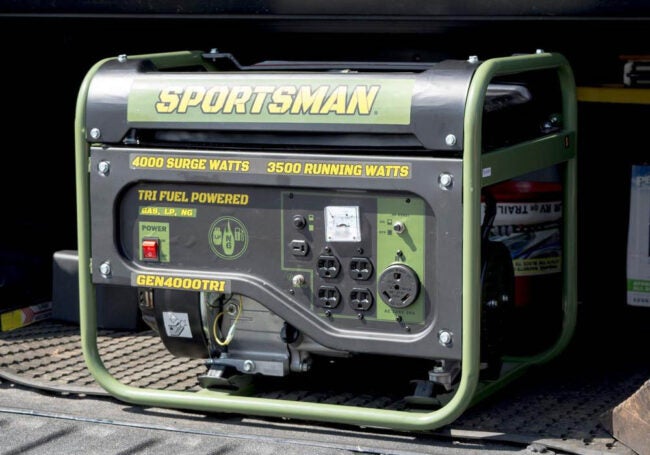 Known for: Sportsman has a reputation for producing versatile multi-fuel generators for outdoor enthusiasts.
Price: $300 to $700
Editors’ Choice: The Sportsman 4,000-Watt/3,500-Watt Recoil Start Tri-Fuel portable generator (available at The Home Depot) is one of the only tri-fuel generators on the market.

Although Sportsman’s generators can be used as backup emergency power for a home, they’re designed for outdoor enthusiasts, with the largest generator topping out at about 4,000 watts. 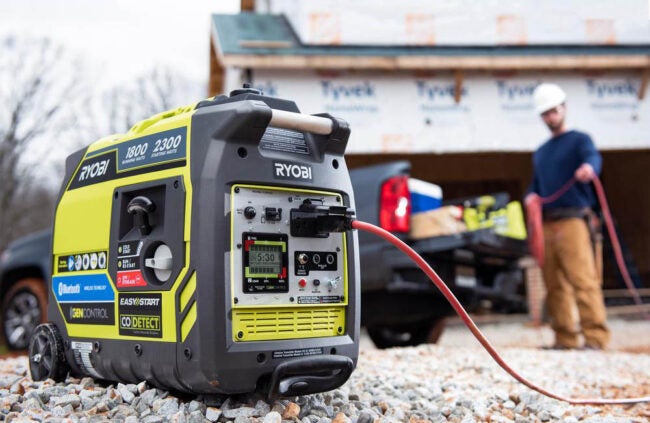 Known for: This brand has a reputation for making user-friendly tools, including generators.
Price: $500 to $800
Editors’ Choice: With digital controls and the ability to be monitored via a smartphone, this 2,300-Watt Recoil Start Bluetooth inverter generator (available at The Home Depot))is an example of the user-friendly features Ryobi’s generators offer.

Ryobi launched in 1943 as an auto parts company before later expanding into power tools and generators. Today, the company’s power tools are sold primarily through The Home Depot. Like its line of power tools, Ryobi’s generators are relatively affordable.

Though the company produces just a handful of models, Ryobi’s generators feature innovative controls that make them more user-friendly than many other generator brands. Its most popular model features digital displays that provide real-time data regarding fuel level, power load, and runtime, all of which can be monitored via Bluetooth from a smartphone. These generators also come with safety features, including a carbon monoxide automatic shut-off switch.

Point out Hearth Marshal: Generator security tips to retain you and your family members risk-free

The ability you have to have on any finances

Not just any pets