“The need has become clearer and clearer over the years,” Harris said. Other needs include HVAC system repairs estimated at $1 million; electric, plumbing and technology updates; and radon in areas of the basement at levels not allowable in schools. A 2020 project to repair the building elevator cost $73,145 and the building was out of Americans with Disabilities Act compliance during that work.

“We are not doing a levy at this point,” said Rachelle Via, library executive director in a project presentation made along with Harris to the Miami County commissioners. The commissioners are the taxing authority for the library, but the library is fiscally independent from the county.

The project was called “exciting” by Commissioner Wade Westfall, who lives nearby.

The proposed new library would be constructed on the existing library property but the structure would be set back further to today’s parking area to allow for more green space between Main Street and the building. The space would provide “a more prominent park-like setting that would match the downtown drive, what you have done at the Courthouse and the Hayner Mansion,” the library’s two neighbors to the east, Harris said.

Hallways at the Troy-Miami County Public Library are used for storage due to lack of storage space. MARSHALL GORBYSTAFF

The building would be three floors with adult and welcome services on the first floor, children and teens areas on the second, and offices and a large community space on the third floor.

Among features planned are a room on the first floor with fireplace and decor similar to the Hayner Mansion based on people’s comments about how much they enjoyed the library when it was at Hayner. A slide also is planned from the second floor children’s area to the first floor. 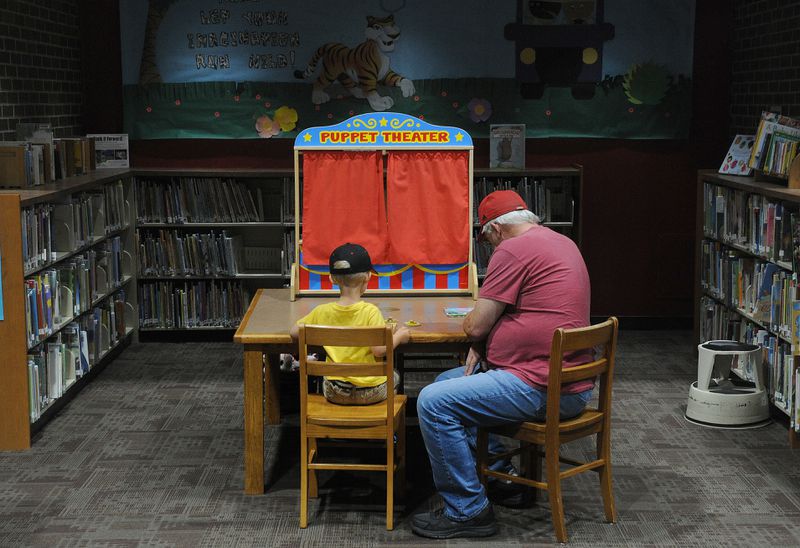 Bill Call and his grandson Zayne, 3, work on a puzzle together at the Troy-Miami County Public Library Thursday July 1, 2021. MARSHALL GORBYSTAFF

The new library’s exterior would reflect the architecture of the Hayner Mansion and other downtown historic buildings.

“The interior is modern and airy, but with the exterior we wanted it to fit in with some of the other architectural features of the downtown,” Harris said.

Other options to a new structure were explored. They included building an addition, removing the existing building or moving to a new location.

Happily family ever after