These resinous and often aromatic trees are long-lived garden staples—some types can survive for hundreds of years. Most pine trees are naturally resistant to disease and insect infestation, and they come in a variety of sizes and shapes. The following seven types of pine trees can grow in several types of climates, and each brings a definitive style to the landscape.

RELATED: Hardiness Zones 101: What All Home Gardeners Need to Know 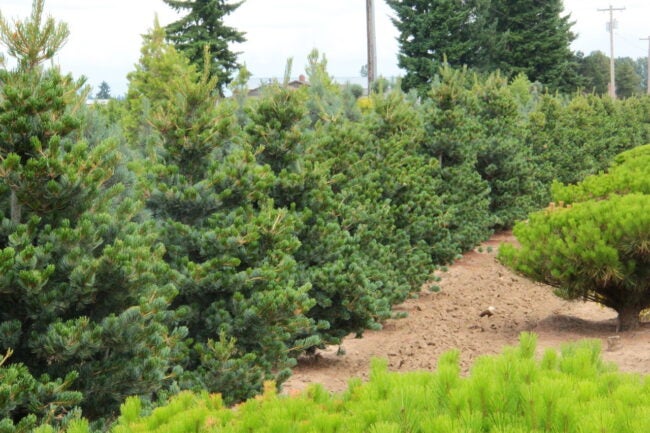 The Japanese white pine (Pinus parviflora) grows well in areas as far north as zone 5 (see USDA Hardiness Zones), where wintertime low temps do not drop below -20 degrees F. The tree can reach mature heights of up to 80 feet with a 40-foot spread, so it needs a location where it has room to grow.

This pine might produce a single trunk, or split into two or more trunks as it grows, making it a popular specimen tree for pruning in traditional bonsai style. It produces eye-catching clusters of dark green needles that resemble tufts.

For such a large pine tree, the Japanese white pine produces unusually small cones that measure about 2.5 inches long. The young tree features smooth gray bark that eventually becomes rough and sheds in scales, providing natural mulch around the tree’s base and adding to visual interest. It prefers sunny locations and rocky slopes but will grow in most types of well-drained soil. However, it doesn’t fare well in hot, humid regions.

Best For: Large, sunny rock gardens as a specimen tree. 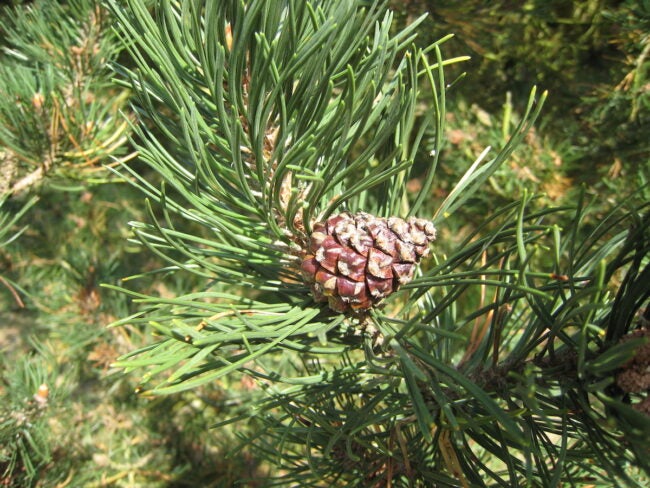 Making a striking statement in the landscape, the Swiss mountain pine (Pinus uncinata), grows straight and erect, reaching a mature height of up to 65 feet and a spread of 25 to 30 feet. Dwarf varieties are more compact, reaching only 8 to 10 feet high. Cold-hardy to USDA zone 5, the tree will survive winters where low temps do not extend below -20 degrees F.

The Swiss mountain pine is native to Europe and thrives naturally at high elevations. Still, it will grow at elevations as low as 650 feet above sea level. The bark of the tree is an attractive ashy gray-brown that develops splits and scales as it grows. The leaf needles of the Swiss mountain pine range in color from dark to forest green and may also feature a grayish tinge.

The tree’s seed cones appear in early summer and boast a purplish hue, which turns to a shiny dark brown in late autumn. The tree will grow in a variety of soil types as long as they’re not soggy, and though it prefers a sunny location, it also grows in partial shade.

Best For: Single specimen trees or combined with shrubs of different species to achieve an attractive visual composition. 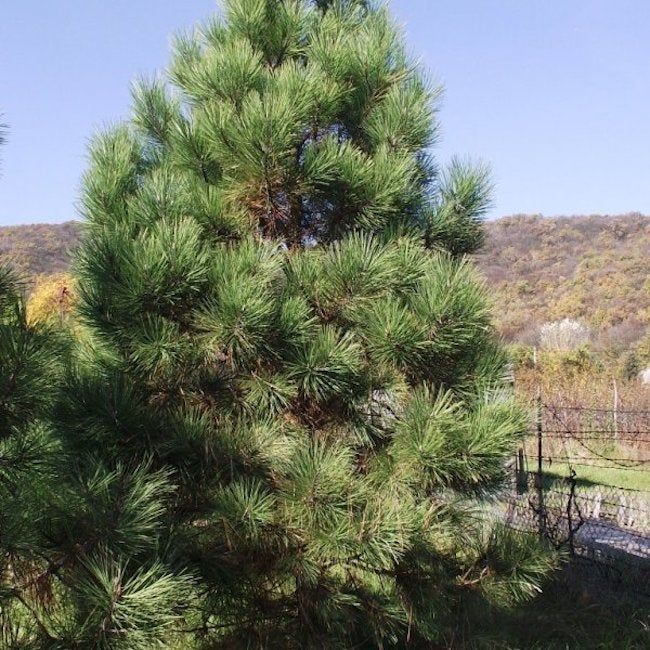 A compact version of Jeffrey pine, ‘Joppi’ (Pinus jeffreyi ‘Joppi’) is well suited to sunny rock gardens, where it reaches no more than 6 feet high at maturity. It features puffs of foliage with needles that can grow up to 8 inches long. The tree maintains a rounded habit with no need for trimming or pruning. When grown in a container, it often tops out around 4 feet high and 3 feet wide.

Joppi’s foliage produces a lovely, blue-green tinge that contrasts against its cinnamon-colored bark. One of the more aromatic pine trees, Joppi scents the nearby air during the summer growing season, and it produces cones up to 4 inches long that drop in late fall.

Like most pine trees, Joppi thrives in sunny spots. It grows as far north as USDA zone 5, but it doesn’t care for the hot summer temps found in many southern regions; nor does it tolerate high humidity. It prefers sandy or rocky soil that drains well and stays on the dryer side.

RELATED: The Dos and Don’ts for Landscaping Around Trees 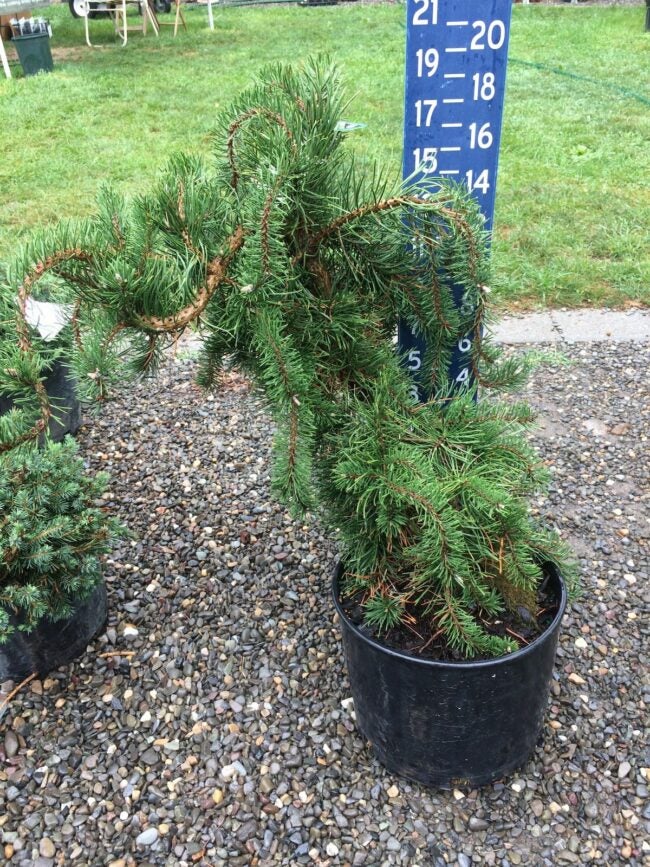 Highly prized for its gnarled and weeping growth habit, ‘Uncle Fogy’ pine (Pinus banksiana) is a popular choice for adding visual interest in perennial borders and rock gardens. It only grows to a height of about 2 feet, although it can be trained on vertical posts to create a taller weeping specimen. Left to its own devices, Uncle Fogy will spread in multiple directions, creating a contorted combination of twisted, nodular stems and bright- to olive-green leaf needles.

Also called “Jack pine,” this scraggly-looking tree provides winter interest in perennial beds and rock gardens, especially when paired with taller tree and shrub varieties to serve as visual backdrops. Uncle Fogy grows on sandy and rocky soils and is extremely cold hardy—it will survive as far north as zone 2, where winter temps can dip as low as -50 degrees F.

But Uncle Fogy doesn’t grow well in areas where the summer temps soar higher than 80 degrees. It prefers a sunny location and once established, can tolerate drought. 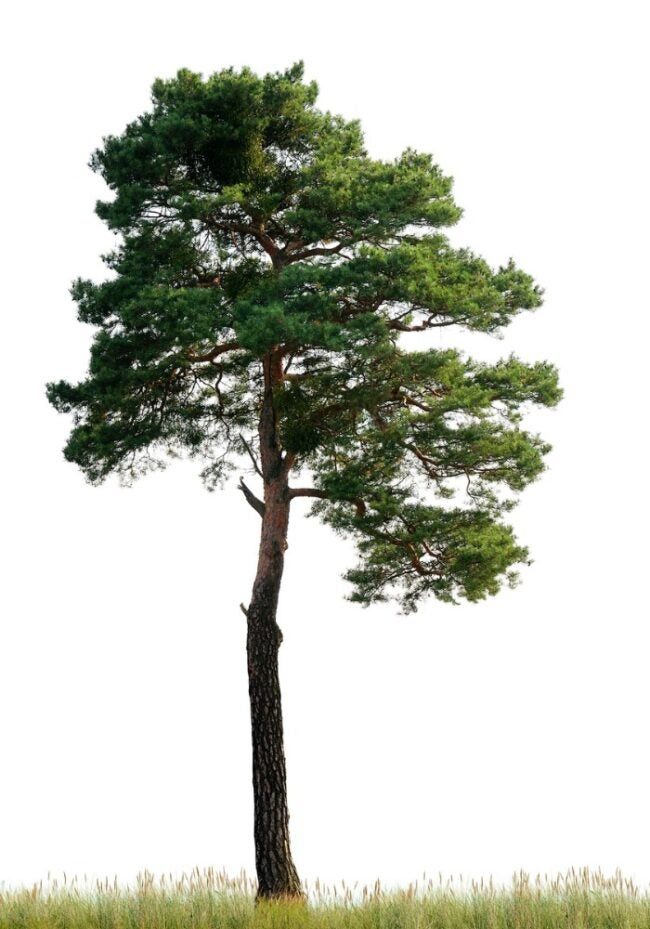 One of the longest-living pine trees—in optimal growing conditions—Scots pine (Pinus sylvestris) can live up to 700 years, although its expected lifespan is 150 to 300 years. The tree can reach heights up to 145 feet with a 60-foot spread but is often smaller in size. A large yard is a necessity.

As the tree grows, the foliage develops only on the tops and ends of its contoured branches, leaving the bottom parts of the branches and trunk notably bare. The thick trunk of a mature Scots pine can reach up to 5 feet in diameter.

Native to Scotland and northern Europe, this pine tree produces blue-green needle leaves that measure up to 2 inches long, and the tree’s bark starts with a slight orange hue that darkens to deep grayish-brown on the older growth at the base of the trunk. Scots pine prefers high elevations from around 3,800 to 8,300 feet above sea level, and it will survive as far north as USDA zone 3, with winter temps that can get as low as -40 degrees F. It prefers a sunny location and rocky or sandy soil that doesn’t get soggy.

Best For: Single specimen tree in a rocky, sunny location. 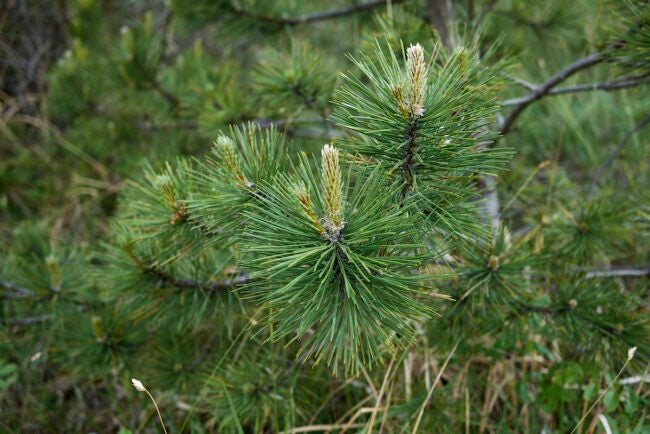 Prized for its striking foliage and upward-spreading growth habit, ‘Oregon Green’ pine (Pinus nigra) is a favorite of professional landscapers who use it to create eye-catching interest in the landscape. New branch growth appears in spring as bright white vertical “candles” on the tips of the branches, providing a stark contrast against the rest of the tree’s rich-green leaf needles. As summer progresses, the white of the new growth turns deep, glossy green.

Oregon Green pine reaches 18 to 20 feet high at maturity with a 10- to 12-foot spread. It grows in regions as far north as USDA zone 4, but like many types of pine trees, it doesn’t like hot summer temperatures and does not do well in regions farther south than zone 8. Oregon Green needs a location where it can receive full sun, and it prefers well-drained soil that doesn’t get soggy. However, it will benefit from weekly watering during summer droughts.

A variety of songbirds choose to build nests in Oregon Green pine trees, which adds another element of delight. The tree is a welcome sight as a single specimen or when planted in groupings as a privacy screen or windbreak.

Related: 5 Things to Do with… Pine Cones 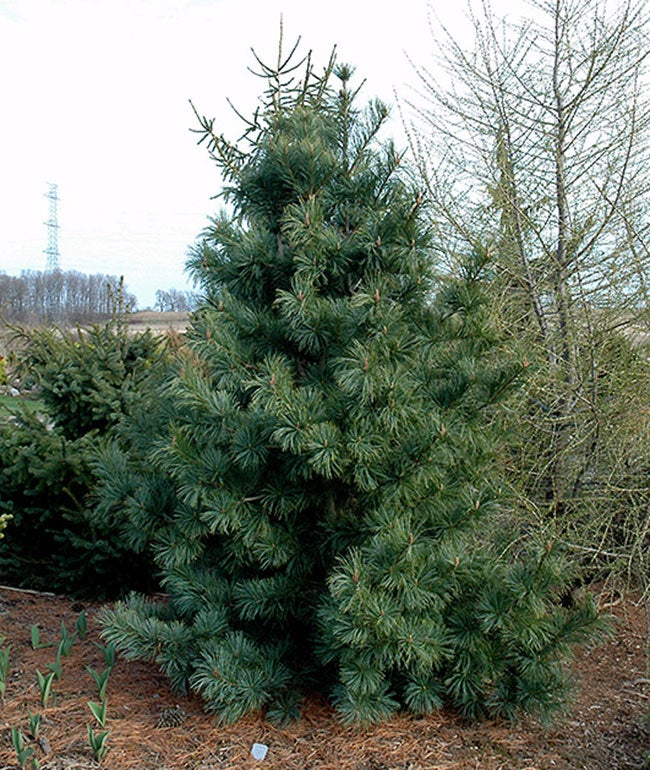 Reaching a mature height of up to 30 feet with a 10-foot spread, Silveray Korean Pine (Pinus koraiensis) is a semi-dwarf pine tree specimen that maintains a compact look in the landscape without the need for pruning to maintain its shape. It produces long, soft, silvery-gray needles that draw attention and differentiate the tree from other pine species.

Grow Silveray as a specimen tree in a rock garden or in groups to form an attractive privacy screen or border. The glossy needles virtually sparkle just after sunrise or before sunset when the sun’s rays hit at a horizontal angle. This pretty pine needs full sun to thrive and prefers well-drained, slightly dry soil. It grows as far north as USDA zone 5 and will tolerate summer heat up to an occasional 85 to 90 degrees F. Once established, Silveray needs only occasional watering, such as during drought conditions.

Best For: Focal point in a sunny yard.